If you are a Starbucks fan (and I’m not), you may have noticed that the plastic cup (regardless of what oddly named size you ordered) containing your ridiculously expensive coffee had the phrase “#RaceTogether” scribbled on its side in placed of  the standard mangled spelling of your first name. Starbucks claimed its “#RaceTogether” campaign was simply the company’s attempt to start a dialogue on race relations in America and was not based on an attempt to profit from the recent racially charged protests against a series of police killings of black men. In an insert to be included in every edition of a USA Today newspaper (which no doubt cost a small fortune–unless you happen to be a coffee-peddling company that practically prints money), Starbucks designed, in their words, “to stimulate conversation, compassion and positive action regarding race in America.”

Starbucks claims its “#RaceTogether” campaign was purely a socially responsible attempt to get drinkers of their expensive coffee blends (with difficult-to-pronounce names and a complex and illogically system of cup sizes) to begin a dialogue on racial issues. After a barage of comments on social media sites primarily by people of color who called B.S. on Starbucks’ claims that their “#RaceTogether” campaign was not based on a corporate altruistic motive, but a disingenuous attempt to exploit the recent rash of protests against policemen killing black men as a way to augment Starbucks’ coffers. Apparently, selling cups of copy for ten bucks a pop is not satisfying the Starbucks bean-counters (pun intended). A number of tweets about the issue question the huge numbers of white employees working at Starbucks, reflected in Starbucks’ own promotion efforts–which all show an unmistakably white hand wrapped around Grande, Venti or Trenta sized cups. [How and why Starbucks chose those labels for small, medium and large sizes are questions for another day.]
Alas, the “#RaceTogether” campaign” was short-lived (by my count, only 4 days, but I may be off an hour or two) . . . So, in the end, intentionally or not, Starbucks started a dialogue on race relations in America–their folly, though not their ill-conceived “#RaceTogether” campaign,” serving as the reason behind that dialogue–a sentiment captured in the picture below: 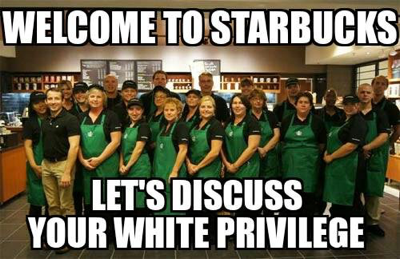 So, dear readers, in the unlikely event you see me in a Starbucks “cafe,” your cup of coffee, regardless of whether it is Grande, Venti or Trenta sized, is on me!